A quarterly publication presenting news and stories of Living Hope Native Ministries, a partnership dedicated to serving the First Nations of Ontario. 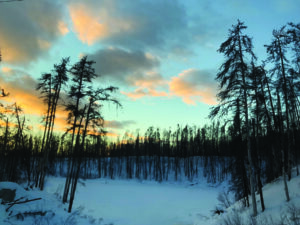 Road north of Red Lake, which leads to the winter road into Pikangikum. Read the full story of the answered prayers and these roads below. (photo by Rita Nisly)

Important News for our LHNM Family

Stuart and Delores Swartzentruber have been serving us faithfully and with passion and dedicated commitment for the last few years in what has been an agreed upon position as interim Executive Director. At the last LHNM Board meeting in November 2021, Stuart informed the board that they will be ending the active leadership work and position of Executive Director on November 1, 2022.

Stuart would like to give more of his energy to local church settings, networking, and relationships. The LHNM Board supports Stuart and Delores in this decision and holds them both in the highest regard for their decades-long service with LHNM in so many capacities.

By God’s grace, we feel that in many ways LHNM has done well through COVID amid all the difficulties. Stuart and Delores express ongoing appreciation for the privilege of leading the LHNM’s staff team. They highly value the team’s commitment and faithfulness in their local settings.

Please pray for Stuart and Delores as they continue to lead us for the days ahead and especially pray for the LHNM Board in the search for executive leadership for LHNM. We all desire to keep moving ahead and stay in sync with where God wants the organization to be.

Bible Class Teacher: This is a unique opportunity to assist in teaching Bible classes in a public school in a northern community. The job description includes classroom instruction for children in grades K-8, community involvement, and supporting the local church. This assignment is located in Pikangikum, Ontario.

Graphic Design: There is an opening for an individual with skills and interests in graphic design, photography, videography, and public relations. The job description includes the quarterly Hopelines newsletter, the annual calendar, and communication with supporting churches and individuals. Occasional travel to LHNM locations and public relations events would be required. Additionally, if based in Thunder Bay, opportunities are available to be involved in and contribute to the local church and youth ministries. This assignment’s location and duration are to be decided with the candidate.

Pastor: Whitefish Bay is a community of approximately 175 people, and is one of three communities which comprise Lac Seul First Nation. The local church would like to have a full-time pastor to lead and guide the church body and community. The Christian school has been a wonderful influence to the community throughout the years, but there is a need for leadership in the body of Christ. With the support of the church body, their desire is for the community to find hope and restoration for spiritual needs.

That in every First Nations context the local church would reach its full potential--worshipping in full devotion, attracting the seekers, mobilizing believers, restoring families, changing communities, affecting the world. 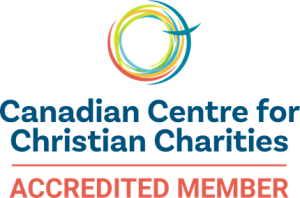 Legacies of Hope and Purpose

Even while we commit our ways and our days into God’s hands, sometimes we are forced to make drastic changes to our plans and to our perspective on the future.

December 2021 has brought into sharp focus the reality of death and the uncertainties about the plans we make for ourselves and for our families. Within a week, two elders who were dear friends of ours left their spouses, families, and communities grieving their sudden passing.

It makes us wonder if, or when, our plans for life and for family will be altered just as suddenly. Would I adapt and embrace the new outlook in similar circumstances? 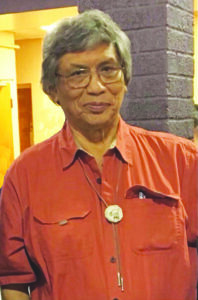 Goyce Kakegamic was a brother who had limitless energy and drive for ideas and ideals that really mattered to him. His zeal for the needs of his fellow Indigenous community members, his passion for the church community he helped establish, and his love for his own family energized him like few others I have known. He found imaginative ways to move people and to steer resources toward the things he believed in.

I really admire such energy and passion. I affirm and applaud the many goals Goyce reached, and the people he encouraged along the way. He seemed to know everyone, and found ways to link people, resources, and influence together to accomplish significant things. Goyce and Lucy made an incredible difference in this world. 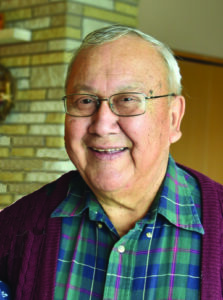 Jim Keesic was an easy-going and friendly brother whom I have known for many years. I first learned to know him while working together in the process of the translation and production of the Ojibway language version of the New Testament. I learned so much from him in that context.

Jim loved his ethnic roots and his language. He had a vocabulary in that language that is unique to his generation and to those for whom a language is one’s heart language, one’s mother tongue. He never stopped encouraging me and affirming me in my attempts to be fluent in his language.

Jim and Mary joined in a new venture in 2005, when he became a founding board member of Living Hope Native Ministries. I remember his initial hesitance to formally commit to the project, even though he was enthusiastic about its value. At first, his advice and wisdom were worded in terms of “you.” Then he began slipping up, and saying “we.” When he caught himself saying “we” he laughed and said, “Osaam waahsa intishaa.” (Now I’ve gone too far.)

Jim became a passionate supporter and wise builder in the formation of that ministry, and even served as chairman of the board for a time. He never stopped believing in the cause and the reasons for working together in sharing the Gospel and encouraging the development of local churches. 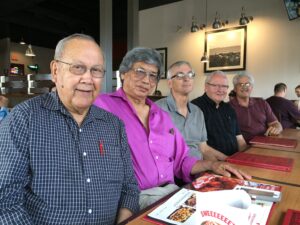 Both Goyce and Jim were confident in their own skins, quite sure of their own roles in this world, and in the meaning and purpose of life. Neither man was afraid of or intimidated by those of us in other ethnic groups. Both Jim and Goyce freely expressed their critiques and affirmations to me as one would to a peer. I deeply respect that. I will miss that.

I can’t imagine the emptiness and void that Lucy and the family feel or the ways that Mary and the family grieve with these sudden losses. We join them and support them in their grief and in their adjustments to life without the presence of these trustworthy and loving men.

A Winter Road and Answered Prayers

By Jeff Kirkpatrick and Colleen Estes 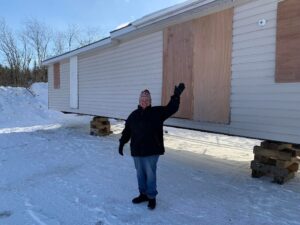 Near the end of February, a trailer home was delivered to Pikangikum via the winter road. This delivery is the culmination of over two years of prayer and hard work by Terry Janzen in partnership with Colleen Estes in Pikangikum. In June 2019, Terry led a six-member team from Shantz Mennonite Church in Baden, Ontario to visit Pikangikum with a desire to see first-hand the ministry needs.

They determined from observation and conversations with Colleen that three things were needed: funds for the renovation of the Eagle’s Nest/Night Light building, additional labourers, and suitable lodging for those workers. God quickly provided for the Eagle’s Nest renovations and a team to do that work. However, the trailer brought to the community in 2010 was no longer livable and extra housing in the community was non-existent.

After support and approval were received in July 2021 from Chief and Council, Terry began relentlessly searching for a trailer for sale. Through an abundance of prayer and the generosity of churches and individuals, God provided over $75,000 for the purchase of the mobile home, moving it to Pikangikum, and setting it up for use there.

The one bedroom trailer is located close to the Eagle’s Nest/Night Light youth building and right across from Colleen’s residence. The area had been a swamp, but after contaminated soil was removed this fall, it was filled in with gravel and leveled just in time for the trailer. It will take some work to make it ready for occupancy, but God will make a way for that as well!

“Pray ye therefore the Lord of the harvest to send forth labourers into the harvest.”

Would you join in prayer with Colleen and Living Hope Native Ministries that the Lord would bring workers who are passionate about children and youth ministry to share in the Kingdom work alongside Indigenous believers? Give thanks to God for His provision!

I see Jesus in You 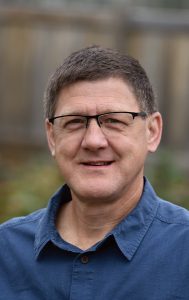 Recently I sat in a Sunday service at New Hope Fellowship in Thunder Bay listening to a new Christian describe what drew him to follow Jesus. He said that he saw happiness and passion when individuals talked about Jesus. As he became part of the group, he observed how people took care of, prayed, and shared love with one another. He said, “I saw Jesus from looking at you. When I talk to you, I see Jesus’ personality in you.” I can think of no greater affirmation for a church than that comment! I was overwhelmed with gratefulness at that moment for the privilege of belonging to this local expression of the body of Christ.

We live in a time when division and polarization are everywhere. In Canada, troublesome issues range from vaccination opinions and the roles of government to the right response to ongoing Residential School findings. (Where can I really find a reliable news source?) Suspicion and mistrust seems to be all around us. There are many reasons for giving in to grief, anger, distrust, disdain or despair, and those things are begging to be embraced. Unity in many relationships is tenuous.

The message of hope and the Good News of Jesus are needed more than ever. I have great hope as I witness restored relationships and forgiveness occurring in local settings. I see unity in the body of Christ being chosen as more important than sectarian opinions. I see legitimate differences paling in comparison to the Kingdom of Christ as His followers choose to love one another as brothers and sisters.

In February I drove with some friends on a winter road to an isolated community that was still struggling with COVID cases. We sat in our vehicle with windows open at -20C and a truck on either side, praying for one another and for unity in the churches and the community. What a powerful thing unity is among Jesus followers! No wonder Jesus said that the unity and love of His followers would convince the world that He was the Creator incarnate! (John 17)

I am grateful for men like Goyce and Jim, whose friendships reached far beyond their own circles. I pray that we would follow their examples and allow the character of Jesus to shine out brightly to all who come in contact with us. May many people say about our churches, “I saw Jesus from looking at you.”